The Scholarship Program BEBUC, which supports excellent students and pupils in the Congo on their way to a professorship, has again evaluated scholars and new candidates in the East of the Congo. This time, students from Kisangani, a city in the North of the country, took also part in the examinations. 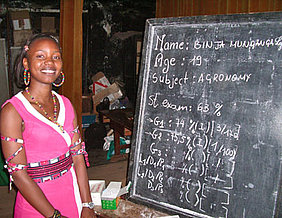 Examination at the blackboard: the student of agronomy L. Munganga from UCB in Bukavu. (Photo: G. Bringmann)

BEBUC has, thus, advanced on its way to reach its ambitious goal to give every outstanding young Congolese the chance to apply for support from 2018 on. The scholarship program aims at giving the Congo a new generation of excellent young professors - by selecting and supporting the very best students - not only financially, but also by mentoring and accompanying them on their way to a professorship.

With the admission of scholars from Kisangani, BEBUC is now organized in five big centers: The institutions in the West (Kinshasa, Kikwit, and Mbanza Ngungu as well as Brazzaville in the neighboring 'other Congo'), in the South (Lubumbashi), and in the Center (Mbuji-Mayi) are always evaluated in March, those in the East (Butembo, Goma, and Bukavu) - and now also in the North (Kisangani) - in September.

Following this rhythm, the Evaluation Committee, under the guidance of Professor Gerhard Bringmann from the Chair of Organic Chemistry I of the University of Würzburg, has recently travelled to the East of the Congo.

Evaluation in Bukavu, Capital of the Province South Kivu

The first evaluation site was Bukavu, capital of the province, located at Lake Kivu and, at the same time, on the border to Rwanda. Since 2012, three institutions have been taking part in the excellence scholarship program: the Université Catholique de Bukavu (UCB), the Université Officielle de Bukavu (UOB), and the Collège Alfajiri. All scholars who had already been supported there, were now examined, together with those from the Université Libre des Pays des Grands Lacs (ULPGL), who came from Goma, and almost all of them got their scholarships prolonged, due to their outstanding results.

Furthermore, five new scholars from Goma were accepted, two of them for the first time also from the as yet not participating high school Institut Metanoïa. There was particular joy about the offer by UCB to permanently provide an own seminar room for BEBUC, where the evaluations will take place in the future.

The evaluation in Bukavu was closed with a solemn scholarship ceremony, where more than 20 newly accepted or prolonged scholars were handed over their certificates.

A highlight of the stay in Bukavu was the visit to the Panzi Hospital, which is associated with the Université Evangélique en Afrique (UEA) and closely collaborates with Brot für die Welt. An important focus of the hospital is gynecology, especially the treatment of sexually abused women, for which Panzi is even listed as a reference hospital. About 40,000 women have already been treated there.

Together with the director and founder of the hospital, Dr. Denis Mukwege, a possible collaboration has been discussed, which include the specialization (master studies) of BEBUC scholars. Dr. Mukwege was awarded the Alternative Nobel Prize in 2013 ("Right Livelihood Award").

Medical-scientific cooperations were also agreed upon in the field of research on new agents against infectious diseases from natural sources like plants, fungi, and microorganisms. In Würzburg, mainly the research network SFB 630 ("Agents against Infectious Diseases") is involved, of which Gerhard Bringmann is the coordinator.

Activities in Goma, Capital of the Province North Kivu

Another key event of the trip was the visit to the famous hospital HEAL Africa in Goma, likewise located at Lake Kivu, which, i.a., helps wounded war victims. HEAL means Health, Education, Action, Leadership. With this institution, BEBUC is already collaborating in the field of training courses for scholars, supported by the foundation Holger-Pöhlmann-Stiftung from Margetshöchheim near Würzburg. The scholarship program itself and the infrastructure of BEBUC are generously supported by the foundation Else-Kröner- Fresenius-Stiftung and by private personal sponsors.

A further highlight of the journey was the visit at the research center CERPI (Center for Research on Poverty and Inequalities), which has recently been founded under the guidance of Nene Morisho and Christian Kaghoma, two former BEBUC scholars and now professors of economics in Bukavu, and with the participation of further BEBUC scholars. In the East of the Congo, there are many initiatives 'from outside' concerning questions of health and peace, whereas CERPI has originated exclusively from to the initiative of young Congolese who interdisciplinarily got together in this important field.

In Goma (on the way back) a 'book donation ceremony' took place at the Université Libre des Pays des Grands Lacs (ULPGL): Bringmann symbolically handed over a book, representing the donation of over ten tons of reference literature and glass equipment that he - supported by the University of Würzburg, the Catholic Diocese of Würzburg, the Protestant??Lutheran Deanery of Würzburg, the company Boehringer??Ingelheim, and the President of the University of Würzburg, Alfred Forchel - had brought on its way to Goma. Bringmann also praised the support by the German Ambassador in Kinshasa, His Excellency Dr. Wolfgang Manig. Moreover, eight scholarship certificates were handed over in Goma. The ULPGL has been participating in the excellence scholarship program since 2012 and has now likewise provided an own seminar room for BEBUC.

In Butembo finally, scholars and new candidates from even five institutions were examined: from the Université Catholique du Graben (UCG), which has already been participating in BEBUC since 2010, the Université Officielle de Ruwenzori (UOR), the ULPGL Butembo, the high school Institut Kambali, and the primary school Nyuki.

The scholarship ceremony started with a minute of silence for Professor Axel Rethwilm from the University of Würzburg, who has passed away recently. Despite his severe disease, he had participated in the evaluations in 2013 and had been a personal sponsor ('godfather') for one of the BEBUC scholars, the student of medicine, Gabriel Bunduki. To his great joy, Bringmann could solemnly announce that Professor Alfred Forchel, President of the University of Würzburg, will continue the sponsorship, like a legacy of Axel Rethwilm. As a result of the evaluation in Butembo, 27 scholars obtained their scholarship certificates there.

For the first time, candidates from the North of the country, from the Université de Kisangani (UNIKIS), took part in the evaluations. They come from the subjects biology, biotechnology, and chemistry. The students had travelled the long way of over 800 kilometers to participate in the evaluation in Butembo. Two of them were successful and are now the first scholars from Kisangani.

Thus, there is currently a total of 56 scholars in the East of the Congo and two in the North. Altogether, BEBUC now supports 157 excellent young Congolese at 16 universities, six high schools, and two primary schools. Impressive are in particular the achievements. As an example, the best final high school exams were obtained by BEBUC scholars in both provinces: by Bienfait Kabuyaya in North Kivu and Gauthier Bahizire in South Kivu.
Altogether, the percentage of women and girls (circa 33 percent) is smaller than that of the male scholars but it constantly grows every year. "The empowerment of girls is a heartfelt concern of BEBUC", Bringmann explains.

In the meantime, the Evaluation Committee has further developed, too: Besides Gerhard Bringmann from Würzburg and Professor Virima Mudogo from the University of Kinshasa (and alumnus from Würzburg), who jointly founded the scholarship program in 2008, Dr. Karine Ndjoko, who could not join the team this time, and the tropical medical doctor Hypolite Mavoko from Kinshasa, Julien Bobineau took part for the first time.

Bobineau is a PhD student in Romance philology at the University of Würzburg and an active member of the Junges Afrikazentrum. In his PhD thesis, he works on the myth and reality of Patrice Lumumba, the first Prime Minister of the Democratic Republic of the Congo. Lumumba was murdered in 1961, a few months after the independence of the country.  Bobineau enriches the Evaluation Committee by his Congo??specific philological expertise.

Following the evaluation, Bringmann paid a visit to the College of Medicine at the University of Malawi in Blantyre. His host was Professor Lutz Heide from the University of Tübingen, who currently spends a two-year research stay there. Heide has been an active sponsor within the scholarship program for a long time and had now invited Bringmann to present BEBUC, in order to explore possibilities for establishing a similar program in Malawi, combined with a scientific collaboration in the field of infectious disease research within the SFB 630 network.