The Université Officielle de Bukavu has awarded the honorary doctorate to the professor from Würzburg Gerhard Bringmann. In doing so it honors his outstanding scientific research and his work in the Congo within the frame of the Excellence Scholarship Program BEBUC.

Bukavu is the capital of the province of South Kivu. It is located at the south-western shore of the picturesque Lake Kivu in the East of the Democratic Republic of the Congo. The State University of Bukavu (UOB) was founded in 1993. It comprises seven faculties, with currently about 5600 students. Since 2012 it has been linked to the University of Würzburg by a cooperation agreement, which is primarily focused on the Excellence Scholarship Program BEBUC, founded in 2008 by Bringmann together with his Congolese colleague Virima Mudogo (University of Kinshasa). Mudogo is also an alumnus of the University of Würzburg. Likewise participating in the scholarship program in Bukavu are the Université Catholique de Bukavu (UCB) and the Université Evangélique en Afrique (UEA) and also the high school Collège Alfajiri.

BEBUC presently supports nearly 200 excellent young up-and-coming academics at 25 Congolese schools and universities and accompanies them on their way to a professorship. This is achieved by a hard, but transparent selection process, by a subject-specific and organizational mentoring initially in the Congo, then, during the master and doctoral studies, abroad (currently more than 70 students), and eventually during their return, until they have attained a professorship. The promoted academics can then pass their knowledge to young Congolese.

In doing so, BEBUC does not only make the academic dreams of young outstanding individuals come true, but, simultaneously, enables the rehabilitation of the universities, which have been weakened so much by civil war and political conditions.

The program is organized by the NGO Förderverein Uni Kinshasa e.V. and its nearly 2000 members from almost 60 countries. The finances come in particular from the German foundation Else-Kröner-Fresenius-Stiftung (Bad Homburg, Germany).

Among the scholarship fellows there are also about a dozen of outstanding young academics from five faculties of UOB – from medicine and pharmacy, geology, law, natural sciences, and from economics. One of them is the chemist Dr. Séverin Muyisa, who most recently, after a previous research stay in Würzburg, has successfully graduated from his PhD studies at the University of Pretoria in South Africa. His doctoral thesis, dealing with new bioactive compounds from African plants, was co-supervised by Gerhard Bringmann, who holds an honorary professorship in Pretoria.

Since 1987, Bringmann has been teaching and doing research at the University of Würzburg, as the holder of the Chair of Organic Chemistry I. Since 2017 he has been further active as a Senior Professor, likewise in research and teaching. Bringmann has now been honored, on the one hand, for his commitment within BEBUC, and, on the other hand, for his outstanding scientific work in the field of natural products chemistry, the search for new bioactive compounds from nature, active against neglected tropical diseases. This was also the topic of a large interdisciplinary research network "Agents Against Infectious Diseases", which Bringmann chaired, supported for twelve years by the Deutsche Forschungsgemeinschaft (German Research Foundation, DFG). From his outstanding scientific work over 750 publications and patents have originated.

By the Gusi Peace Prize and the Médaille du Mérite Civique First-Class in Gold of the Congolese People, in particular his humanitarian merits were honored. Recently he has been awarded the Medal Bene Merenti in Gold of the University of Würzburg and, just a few weeks ago, the Order of Merit of the Federal Republic of Germany (Bundesverdienstkreuz am Bande). His commitment was further honored by the Prize for Good Teaching of the Free State of Bavaria. Bringmann is a member of the European Academy of Sciences and Arts and a fellow of the African Academy of Sciences – and he is now the first to receive the honorary doctorate of UOB.

The solemn ceremony was guided by the Rector of the University, Prof. Jean-Berckmans Muhigwa, who himself has been active within the scholarship program BEBUC for many years. The Dean of the Faculty of Sciences, Prof. Alex Aleke, presented the merits of G. Bringmann and praised his commitment for the Congo. Likewise present were representatives of public life and politics, among them also the Mayor of the City of Bukavu, Méschac Bilubi, and Mrs. Espérance Camunani, the Representative of the Governor of the Province of South-Kivu.

In an ensuing separate ceremony, the diplomas of the graduates were handed over; among the graduates was the BEBUC scholar Thérèse Sudy, who had completed her studies in pharmacy with distinction.

Because of the Corona pandemic, Gerhard Bringmann participated in the celebration online, from Würzburg.

„I am very happy about this distinction from our appreciated partner university in Bukavu. It provides a great motivation to continue our way of improving the academic formation in Congo", said Bringmann.

Information on the Scholarship Program BEBUC and the NGO Förderverein Uni Kinshasa e.V.:

For a recent publication on BEBUC and its goals in ACS Centr. Sci., see: 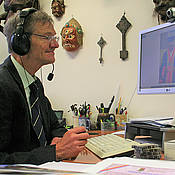 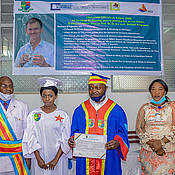 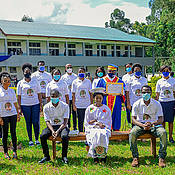