Spatial resolution in optics is generally limited by diffraction to approximately half the wavelength of the light field - a few hundred nanometers in the visible regime. In many applications, however, it would be desirable to circumvent this restriction and perform imaging tasks, spectroscopy objectives, or coherent control on a subdiffraction length scale. The basis for this current research field of nano-optics is provided by employing optical near fields whose spatial properties show variations on length scales smaller than conventional electromagnetic fields.  The combination of ultrafast laser spectroscopy with near-field techniques opens a new realm for nonlinear optics on the nanoscale: ultrafast nano-optics. 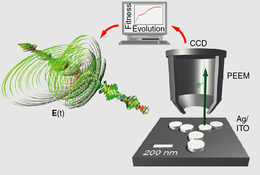 Ultrashort laser pulses excite the optical near field of nanostructures over a broad spectral range, and the coherent superposition of these modes with different frequencies determines the actual local field evolution. Due to constructive and destructive interferences at different spatial positions and temporal instants this can be used for controlling the nanoscopic field in a very general manner.  By using polarization-shaped pulses we were able to control the evolution of the local electric field vector orientation and magnitude in three dimensions [1].  Additionally we have proposed a scheme to utilize ultrafast optical near-field control for a new spatially and temporally resolved spectroscopy on the nanoscale in which ultrashort pump and probe excitations occur not only at different times but also at different positions with subdiffraction resolution [2]. This scheme enables the direct mapping of ultrafast nanoscopic (energy) transport processes with spatial-temporal resolution.

We succeeded in the first experimental demonstration of adaptive subwavelength nano-optical field control [4] in collaboration with M. Aeschlimann (Kaiserslautern), M. Bauer (Kiel), F. J. García de Abajo (Madrid), and W. Pfeiffer (Bielefeld), where we tailored the optical near field in the vicinity of silver nanostructures through adaptive polarization shaping of femtosecond laser pulses [3]. In this combination of adaptive control 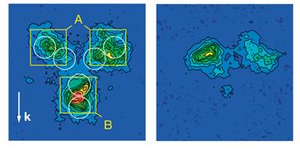 and nano-optics, we achieved subwavelength dynamic localization of electromagnetic intensity on the nanometer scale thus overcoming the spatial restrictions of conventional optics. An example for such a nanostructure, consisiting of six silver disks with diameters of 180nm and heights of 30 nm, is shown on the left: while with an unshaped laser pulse (left panel) photoelectrons are released both form the upper four (region "A") and from the lower two (region "B") nanostructures, an appropriate polarization-shaped pulse can suppress photoelectron emission from region "B" very effectively (right panel).

Prospective applications of this capability is in quantum information processing where such control could be used to optically and selectively address qubits that are only several nanometers apart . Furthermore this method can be used to control nanoplasmonic energy propagation in nanodevices, which is another current research topic.