Investigating the interaction of ultrashort light pulses with matter is a unique possibility to develop a detailed understanding of inter- and intramolecular processes and their dynamics on a femtosecond time scale. 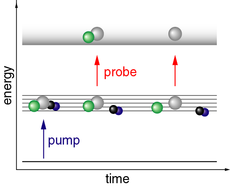 The systems studied in our group include molecules of immanent biological relevance, e.g. the bacteriorhodopsin protein and genetic markers such as the green fluorescent protein (GFP), as well as prototype organic functional materials, e.g. organic dimers and aggregates whose electronic properties have been systematically adjusted to suit the needs of organic light-emitting diodes (OLEDs), photovoltaics and organic memories.

To achieve our objective of a molecular femtosecond time-resolved access to chemical reactions a series of spectroscopic methods spanning from simple fluorescence/absorption spectroscopy to nonlinear techniques such as pump-probe spectroscopy or time-resolved fluorescence upconversion is implemented in our labs, both applied to reactions in the gas phase, where e.g. dissociation reactions of isolated molecules can be studied, and in the condensed phase, where bimolecular reactions are investigated as well.

While the linear techniques provide only "static" information about the molecule, pump-probe spectroscopy, where one laser pulse is used to initiate a certain reaction and a second laser pulse to measure the dynamics induced by the first pulse, enables us to determine and identify characteristic lifetimes of excited states, the existence of competing reaction pathways, and the efficiency of these photochemical reactions. For this purpose, a variable time delay between the pump and the probe pulse is introduced, allowing a real time mapping of photoreaction dynamics. 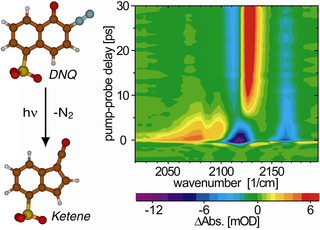 With a new setup for the IR-regime our research is no longer limited to the systems' electronic properties: Studying modifications of the vibrational spectra with sub-ps-resolution allows direct insight to structural changes. An example is given on the left, where the time-resolved investigation of the Wolff rearrangement reaction of DNQ (diazonaphtoquinone) is shown, which releases a nitrogen molecule and forms a ketene after it is excited with ultraviolet light. The ketene product has other absorption properties than DNQ, which can be seen in the time-resolved absorption spectrum: one part of the infrared probe pulse is absorbed more strongly (in red, absorption of the newly-formed ketene molecules), while another part is absorbed less (in blue, bleaching of the DNQ molecules) in comparison to the value without a pump pulse to start the photoreaction.

The majority of our spectroscopic experiments is eventually followed by a deliberate and specific manipulation of the unravelled reaction pathways in subsequent quantum control  experiments.