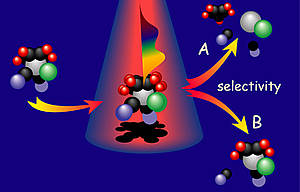 Active control of chemical reactions on a molecular level, that is, the selective breaking or making of chemical bonds, is an old dream. However, conventional control agents used in chemical synthesis are macroscopic variables such as temperature, pressure or concentration, which give no direct access to the quantum-mechanical reaction pathway.

A totally different approach to manipulate chemical reactions is femtosecond quantum control, where molecular dynamics are guided with specifically designed pulsed light fields that only span tens and hundreds of femtoseconds. Thus, it is possible to efficiently and selectively reach user-defined reaction channels. In the last years, experimental techniques were developed by which many breakthroughs in this field were achieved and a multitude of reactions could be controlled, making femtosecond quantum control a powerful and established technique.

The major "ingredients" are femtosecond laser pulses, which are manipulated in pulse shapers to generate electric field profiles which are specifically adapted to a given quantum system and control objective. The electric field can be controlled in a well-defined way in its spectral amplitude, spectral phase and by a new technique developed in our group also in its polarization state. Thus, a modulation of the laser pulse is possible within tens of femtoseconds, the intrinsic timescale of the molecular dynamics.

The search for optimal fields can be guided by an automated learning loop, which employs direct feedback from experimental output. Thereby quantum control over photoinduced chemical processes both in the gas phase and in the condensed phase has become possible. The molecular system under investigation can be as small as diatomic molecules like the potassium dimer in the gas phase, but also as large as complex biological functional molecules (for example proteins like bacteriorhodopsin or the green fluorescent protein in a condensed-phase environment). For the simpler systems an analysis of the optimal pulse shape can lead to an understanding of the reaction mechanisms involved in selecting a certain reaction channel. Of course this gets more complicated as the complexity of the system increases. New methods for efficiently extracting the encoded information about the molecule from the optimal pulse shape are being developed. 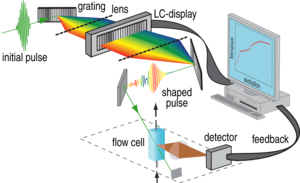 A exemplary experimental setup for a liquid-phase quantum control experiment is sketched on the left. A femtosecond pulse shaper (the device in which the spectral contributions of the laser pulses are dispersed in the figure) is used to generate modulated laser pulses. These can be employed to study the light-matter interaction for specific pulse shapes, or they can be part of a closed-loop quantum control experiment where the outcome associated with different laser pulses is used by a learning algorithm to find the electric field which optimally fulfills a desired reaction. Depending on the type of experiment, experimental feedback signals may be collected e.g. from gas-phase time-of-flight mass or photoelectron spectrometry, or from liquid-phase emission spectroscopy, as indicated in the figure shown here. The learning algorithm (based on an evolutionary strategy approach) iteratively improves the applied laser pulse shape until an optimum is reached.

More information can be found in two review articles from our group: