In general optical spectroscopy allows insight into the structure of matter on the atomic level. While linear spectroscopy predominantly probes static states, nonlinear timeresolved methods are suited for probing dynamic processes. However, classic established techniques like transient absorption spectroscopy or transient grating spectroscopy are limited to measuring quantum mechanical populations and the actual cause for any change with time, namely couplings between the states, are not accessible directly with these techniques. This drawback is eliminated in two-dimensional (2D) spectroscopy. By systematically varying the time-delays of three exciting laser pulses and complete characterization of the nonlinear optical response, one can also gain the couplings between the states. Thus it is possible, e.g., to experimentally determine energy transfer processes in complex systems with a spatial resolution of nanometers and a temporal resolution of femtoseconds. 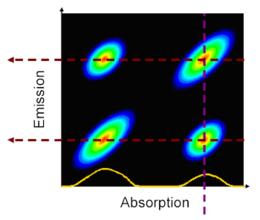 The results of such an experiment are arranged in an intuitively comprehensible 2D spectrum. In this type of diagram (see schematic graph on right hand side) the emission frequency is plotted against the excitation frequency so that couplings and energy transfer can immediately be read from the graph as cross-peaks, i.e., intensities off the diagonal of the spectrum. 2D spectroscopy yields the full spectroscopic information up to third order; therefore all conventional spectroscopy techniques (like transient absorption) are "contained" within a 2D spectroscopy experiment.

Despite the enormous advantages of 2D spectroscopy, experimental realizations are subject to a number of technical difficulties which inhibits a ubiquitous and simple employment of this technique especially in the visible spectral region. In our laboratories we try to address these problems with new, inventive developments. The advantages of a broad spectral bandwidth are numerous: A broad spectrum can facilitate a high temporal resolution in a 2D experiment. Further, the number of potential systems to study is increased by a higher excitation bandwidth as well. And, most importantly, a wide range of energy levels can be covered simultaneously and therefore information about the couplings in a complex system with many chromophores can be gained. The visible spectrum (500 nm - 750 nm) is especially interesting because absorptions of biological systems, organic photovoltaic elements, natural and artificial photosynthesis complexes, quantum dots, dye complexes, aggregates π-complexes etc. lie in this spectral region.

2D spectroscopy has so far only been implemented in the visible by a few research groups around the world; however, the hitherto existing results are most promising. One example is an experiment on the light harvesting complex FMO, where the energy transfer upon absorption of a photon was followed with a spatio-temporal resolution of nanometers and femtoseconds (see figure). The excitation energy does not simply "climb down the ladder" but the transfer is governed by the respective quantum mechanical overlap of the excitonic wavefunctions [1].