Due to their various advantages, covalent ligands currently experience an intensive renaissance not only in academic but also in industrial developments.1 Regarding their exploitation as drugs, they are more efficient in vivo and can be administered in lower doses and with reduced frequency due to their prolonged residence time at the target. Moreover, the concept of covalently modifying a protein offers the possibility to address targets that were assumed completely intractable for small-molecular drugs because specific binding pockets are absent (“drug the undruggable”).2 So far, however, most covalent ligands have been found serendipitously not the least because the tools for their rational optimization or de novo design are not as well established and elaborated as the corresponding methods for the design of non-covalent ligands. Our workgroup elucidates and subsequent apply principles and fundamental concepts relevant for the rational design and optimization of covalent protein ligands. Several investigations are also devoted to the clarification of inhibition mechanisms of covalent inhibitors3,4 and the rationalization of known structure-activities relationships. Additionally, we benchmark the accuracy of available theoretical approaches for the description of the covalent bond forming step.5

The rational design of covalent inhibitors from scratch is nearly impossible because some information about the geometrical structure of the target enzyme are essential. Furthermore, theoretical approaches to predict enzyme-inhibitor complexes are often very inaccurate. Hence, structure-based protocols should be less error prone than approaches without any structural information.

Figure 1: Possible starting structure for protocols for a rational design of covalent inhibitors with desired properties

Recently, in collaboration with the Schirmeister in Mainz we developed a protocol for the rational design of reversible inhibitors starting from known irreversible ones (Figure 3).11 The protocol comprises various computational steps, which are closely interconnected with the corresponding experiments, which realize and verify the predictions. The investigations used K11777, a well-known irreversible inhibitor of rhodesain, as starting point. K11777 possesses a vinylsulfone group as electrophilic warhead, which reacts irreversibly with the CYS25 residue of the active site of rhodesain. Within the investigations, we developed two possible modification of the warhead.11 While the first one turned out to be inappropriate12 the idea to substitute one hydrogen of the double bond by a halogen atom changed the thermodynamic of the reaction in the desired way. In both cases, the computed predictions turned out to be correct, i.e. the used approaches seem to be sufficiently accurate. The protocol comprises standard quantum chemical approaches to screen possible warheads. Hybrid approaches, which combine quantum mechanical (QM) methods to describe the chemical reactions with molecular mechanical (MM) methods to fold in the influence of the enzyme environment, were employed to compute the inhibition reactions within the enzyme. The computations started from the crystallographic data for the covalent enzyme-inhibitor complex of K11777 and rhodesain and computed the reaction path backwards to the non-covalent complex. For more information, we refer to the literature.11,12 In these investigations the group of Prof. Schirmeister  (Mainz) performed all synthesis and testing in enzyme as well as in solution. Additionally, they contributed docking investigations. Further important contributions came from the group of Prof. Hellmich (Mainz) who analyzed the enzyme-inhibitor complexes by 19F and Prof Tenzer (Mainz) who contributed mass spectrometry measurements to proof that a covalent bond is formed. 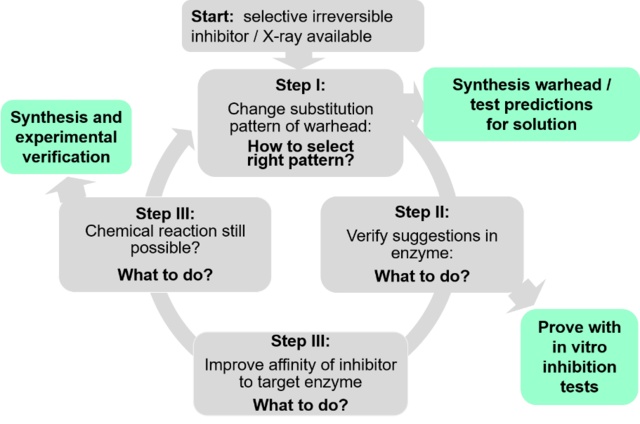 Additionally, in close collaboration of Prof. Schirmeister (Mainz) we investigated structure-activity relationships (e.g. regio and stereoselectivity) of inhibitors whose electrophilicity results from three-membered rings or various Michael systems.4,13,14 In ongoing work, we investigate the inhibition mechanism of compounds with nitro-alkenes as warheads. They are considerably more potent than vinylsulfone-based inhibitors and seem to possess a different inhibition mechanism.15 In ongoing investigations we also investigate chloro- or nitrile-substituted 1,4-napthoquinones as warheads which can undergo Michael-type addition and/or substitution reactions in cooperation with Prof. Opatz (Mainz) and  Prof. Schirmeister (Mainz).

In cooperation with Prof. Gütschow (Bonn) we investigate the inhibition reaction of carbamate-based compounds with cathepsin B. The underlying mechanism seem to be more complicated than the above-discussed additions to activated double bonds because it consists of several steps which often involves proton transfer processes. In an ongoing study, we compare different reaction routes to shed some light on this complicated issue.

For K11777 and its Derivative 7a (Figure 5) we investigated if the measured trends in the kinact values for the inhibition of rhodesain16 can be explained by theory (kinact (K11777) = 0.029 s-1; kinact (7a) = 0.00051 s-1). The computed reaction profiles of the covalent bond formation do not show differences as already found within the investigation of the stereoselectivity of the inhibition cathepsin B by E64C related compounds.13,17 In contrast, MD simulation indicate that the differences arise from the geometrical orientation of the non-covalent complex. They predict that for K11777 the distance between the electrophilic center of the warhead and Cys25 is considerably smaller than for 7a, for which larger distances are found. In cooperation with Prof. Hellmich (Mainz), Prof. Schindelin (Würzburg), and Prof. Ochsenfeld (LMU Munich) we investigate the binding mechanisms of covalent inhibitors of Tryparedoxin (Tpx) from T. brucei.

In cooperation with the working group of Prof. Seibel (Würzburg), we investigate the covalent modulation of Tyr196 and Tyr247 residues of in a levansucrase from Bacillus megaterium (Bm-LS) from glycoside hydrolase family GH6818 by 4-phenyl-3H-1,2,4-triazole-3,5(4H)-dione (II Figure 6).19-21 In cooperation with Prof. D. Rauh we investigate the reactions of Cys296 and Cys310 of the protein kinase Akt with different covalent inhibitors 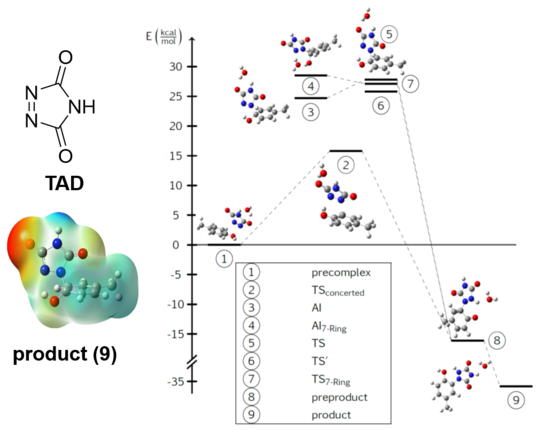 4-Phenyl-1,2,4-triazolin-3,5-dione (PTAD) and its derivatives are powerful electrophile modification reagents that can react in an ene-type reaction with tyrosine residues as demonstrated by Barbas III et al.19-21 To get insights into the reaction mechanisms of PTAD and related compounds we started our investigations with the reaction TAD because some literature is available. According to the investigations of Barbas III et al., the reaction of PTAD a tyrosine residue shall proceed via the concerted transition state of the ene-mechanism,21 theoretical investigations of Houk and coworker22 indicate that the corresponding reaction between propene and TAD proceed via a step wise rather than a concerted reaction. We computed the reaction of TAD with propene, vinyl alcohol and para-cresole to investigate the differences. For the computations, we employed the CASPT2 to describe concerted and step wise intermediates with similar accuracy. Our computations support the findings of Houk and coworker for the reaction of TAD with propene but also show that the reactions of vinyl alcohol and para-cresol proceed via the concerted mechanism (Figure 6), i.e. our computations also support the interpretation of Barbas and coworker. The investigations are performed in collaboration with  Prof. Seibel .

The protein kinase Akt represents an important new target for a variety of solid tumors.23 The Rauh lab (Dortmund)  who develops various covalent allosteric inhibitor for Akt24 can show that compounds in which the acrylamide warhead is differently positioned covalently react mainly with Cys296 or with Cys310 in AKT1. To investigate reasons for this regioselectivity we perform MD simulation for the corresponding non-covalent enzyme-inhibitor complexes. They indeed show that the regioselectivity can be rationalized by variations in the distances between the electrophilic center of the warhead and the given cysteine residues. We also investigate reasons for the activation of Cys296 and Cys310. The simulations indicate that Cys296 may only be deprotonated by Glu85 because the computed distances to Arg76 seems to be too large. For Cys310 Arg15 and Glu298 may contribute to the activation.

In cooperation with Prof. Kisker and Prof. Sotriffer we investigate non-covalent inhibitors for InhA and FabI. The crystallographic data of the inhibitor 55JS in FabI as well as InhA indicated that 55JS InhA adopts the hydroxpyrimidin form while the tautomeric form pyridon is taken in FabI. We could support this assumption by MD simulations. To differentiate between various effects, we computed the energy difference between both tautomeric forms employing quantum chemical approaches. Our computations indicate that the diphenylether substituent and the environment influence the relative energies between the tautomeric forms differently.  Without substituent the hydroxypyrimidin form is more stable in vacuum but solvent effects make the pyridone form the most stable tautomer. In contrast for the inhibitor 55JS the pyridone tautomer is more stable in vacuum and in an implicit solvent environment.