The 48th German Liquid Crystal Conference (GLCC2022) was the first conference to be held in presence at the University of Würzburg after a two-year break.

Participants at the 48th German Liquid Crystal Conference (GLCC2022), the first on-site meeting after the pandemic at the University of Würzburg 2022 in front of the Central Lecture and Seminar Building. (Image: Lisa Gerbig)

„Eventually a conference with face-to-face contact of the participants”, that was the prevailing mood to which around 80 Liquid Crystal researchers gather from the 28th to 30th of March 2022 at the University of Würzburg. The participants were invited by the German Liquid Crystal Society (DFKG) and the organiser team around Prof. Dr. Matthias Lehmann (University of Würzburg) and Prof. Dr. Heiner Detert (University of Mainz) and welcomed by the vice president for innovation and knowledge transfer Prof. Dr. Matthias Bode. This meeting was unique from two perspectives: First, it was the first on-site event after the pandemic at the University of Würzburg, and second, for the first time researchers from all over Europe gathered at this national conference.

Liquid crystals in everyday life and in nature

The topic of the conference was the multidisciplinary area of „Liquid Crystals“, which were discovered 134 years ago by Friedrich Reinitzer (Prag) und Otto Lehmann (Karlsruhe) and which started 80 years later their triumphant progress in the display technology (LCDs). Today, these materials can be encountered in LCD televisions, notebooks, PC flat panel displays, smartphones, but also in liquid soaps. The combination of fluid (liquids) and anisotropic (crystal) properties in the so-called fourth state of matter, the liquid crystal, is of outmost importance also in nature, for example for the spinning process of spider silk, the cell double walls or the cell division (mitosis). Also, during the production of high-tensile strength and light-weight polymers, such as Kevlar® or Vectra®, which are applied for bullet-proofed jackets or high-performance ropes for climbing, the liquid-crystalline state of matter plays a pivotal role.

Spanish researcher Professor José Luis Serrano Ostáriz was awarded the most prestigious prize of the German Liquid Crystals Society and the Alfred Saupe foundation for his lifetime achievements – the Alfred Saupe Prize 2022. The Vorländer lecture, with which young, successful researchers are honoured at the beginning of their career, was assigned to the British shooting-star Dr. Richard Mandle (University of Leeds). He is one of the discoverers of the ferroelectric nematic phase, for which a high application potential is predicted. The organization of the meeting was possible not without the numerous sponsors such as Synthon Chemicals, Merck, and Bruker.

Thus, the national and international participants from Italy, Germany, England, Poland, The Netherlands, Luxembourg, Spain, Portugal, Poland, France and India could also experience the exciting cultural impressions of Würzburg and the culinary pleasured of the Franconian region at the conference dinner in the residence and the wine tasting in the freshly renovated state court cellar (Staatlicher Hofkeller). The participants enjoyed the conference in Würzburg and certainly intent to visit the region again in the future for scientific but also for touristic reasons. 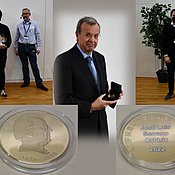