Professor Siegfried Hünig's 90th birthday was celebrated on May 20th with an impressive gathering of scientists from all over the country. The testimonial lecture given by Professor Manfred Reetz turned out to be the initiation of the annual "Sigfried Hünig Lecture" which is funded by donations. 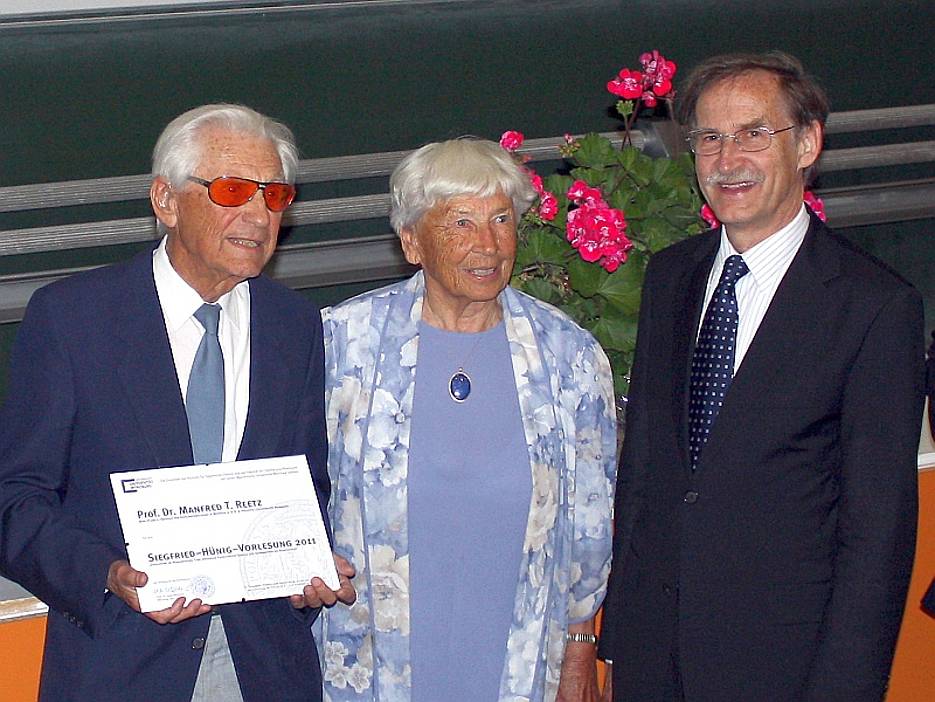 Only recently Prof. Dr. Dr. h. c. mult. Siegfried Hünig has been awarded honorary senator of the Julius-Maximilians-Universität Würzburg. On the occasion of his 90th birthday the Faculty of Chemistry and Pharmacy and the German Chemical Society (GDCh) organized an anniversary celebration in the faculty's biggest lecture room. It was well filled with local students, faculty members and guests from all over the country. In particular it was an impressive gathering of former co-workers and distinguished active and retired colleagues.

After opening words from Chairman Prof. Seibel the university's Vice President Prof. Riedel, Dean Prof. Holzgrabe as well as Prof. Würthner pointed out Hünig's merits. Besides his outstanding scientific contributions - with the so called "Hünig Base" as the most prominent example - Hünig's great interest in teaching was mentioned and his vision for restructuring the Institute of Chemistry in the late 1960's and planning the new chemistry centre.

The testimonial lecture "Evolution in vitro: A rich source of asymmetric catalytic reactions" was given by Prof. Dr. Manfred Reetz (Max-Planck-Institut für Kohlenforschung & Philipps-University Marburg). Just before the lecture Prof. Würthner surprised the lecturer and Prof. Hünig when he announced that an annual "Siegfried Hünig Lecture" will be initiated thanks to generous donations from the chemical industry, colleagues and by many former students of Siegfried Hünig. Starting with Prof. Reetz, an internationally renowned chemist will be invited each year to give the "Siegfried Hünig Lecture" at the University of Würzburg.