On the occasion of its Anniversary Celebration 2019, the University of Würzburg has awarded Gerhard Bringmann, in recognition of his extraordinary humanitarian commitment, his outstanding scientific achievements, and his particular merits to the University, the Medal Bene Merenti in Gold.

After his PhD and his habilitation at the University of Münster, Gerhard Bringmann was active from 1987 as a full professor and holder of the Chair of Organic Chemistry I at the University of Würzburg, until, in 2016, he obtained the emeritus status, and now, with tireless commitment, continues his activities in research and teaching, within the frame of a senior professorship.

Not only did he accomplish first‐class and internationally renowned research in the field of natural products chemistry, among others as the Speaker of the research network "Agents Against Infectious Diseases", but he was also, far beyond the normal call of duty, committed as a Vice Dean, Dean, and as a member of the Senate and of the University Council over many years. From 2011 to 2013 he, moreover, was the Vice Chairman and subsequently, until 2015, the Chairman of the Senate of the University of Würzburg. His numerous distinctions are evidence of his great success as a scientist and as a university teacher, among them the Adolf‐Windaus Medal for Natural Products Research, the Paul‐J.‐Scheuer Award for Marine Biotechnology, and the Prize for Good  Teaching of the Free State of Bavaria. Furthermore he was awarded two Honorary Professorships in China and four Honorary Doctorates in the Democratic Republic of the Congo, and he has been, since 2018, an Extraordinary Professor at the University of Pretoria. In addition, Gerhard Bringmann is a member of the European Academy of Sciences and Arts and of the African Academy of Sciences. Gerhard Bringmann has achieved great merits in the humanitarian field as well.

For decades he has been collaborating with scientific partners from several African countries, aiming at the interdisciplinary search for new lead structures in the fight against cancer and neglected tropical infectious diseases. From 2006 to 2009, he was the Founding Speaker of the Africa Circle at the University of Würzburg (today Forum Afrika‐ zentrum). He was a member of the Directory Board of the Bavarian Research Institute for African Studies (BRIAS), founded in 2014. However, one project that should be particularly emphasized is the promotion of young scientists onan international level.

On his numerous trips to Africa, Gerhard Bringmann was confronted with the lack of equal opportunities for young academics, in particular with respect to university education. He therefore, together with Prof. Virima Mudogo (Alumnus of the University of Würzburg and, later, Vice President of the University of Kinshasa) founded, in 2008, the worldwide unique Excellence Scholarship Program BEBUC, which he has led ever since.

For meanwhile more than ten years the program has been supporting outstanding students, as also excellent pupils in the Democratic Republic of the Congo, in order to counteract the dramatic structural – and qualitative – decay of the previously excellent Congolese universities and the over‐aging of the academic staff and the lack of young academics. It is the aim of the program to give the Congo a new generation of outstanding new professors. After their PhD abroad, the young Congolese shall return to Africa as university teachers and pass on their knowledge to the young generation. For this, they are not only supported financially, but also by a specific, individual mentoring. Personal sponsorships as well as joint excursions and interdisciplinary seminars facilitate network building. BEBUC has a democratic structure, with speakers at all of the 25 involved institutions, and with a Speakers' Council, chaired by a Prime Speaker.

The program meanwhile supports about 200 excellent young people from all subjects and from the entire Congo. In 2018, several scholars reached the great objective of professorships in the Congo. For his exceptional and philanthropic commitment, Gerhard Bringmann was awarded the Civic Medal First Class of the Congolese People in Gold and, in 2014, the Gusi Peace Prize. Also honored were Prof. Dr. Gerd Müller (Bene Merenti in Gold) and Dr. Dieter Mahsberg (Bene Merenti in Silver), as well as the politicians Barbara Stamm, Dr. Thomas Goppel, and Eberhard Sinner (Honorary Senators of the University of Würzburg), and the President of the National Academy of Sciences Leopoldina, Prof. Dr. Dr. h.c. mult. Jörg Hacker (Röntgen Medal – Science Award). 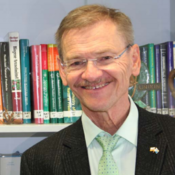