More than 200 participants met for the fifth edition of SupraChem in Würzburg in February 2019. Besides 27 short lectures and 111 poster contributions by German and European participants, three plenary lectures by internationally renowned scientists were given as true highlights, one of them from the 2016 Chemistry Nobel Laureate Sir Fraser Stoddart.

All participants of the SupraChem 2019 in Würzburg (photo: C. Stadler)

The biennial conference series on all aspects of supramolecular chemistry was initiated by Prof. Carsten Schmuck in Essen in 2011. After Münster, Berlin and Aachen, scientists from Würzburg, namely Prof. Dr. Frank Würthner, Chair of Organic Chemistry II, and Dr. Florian Beuerle, Junior Research Group Leader at the Center for Nanosystems Chemistry, served as Conference Chairs for the fifth SupraChem. Compared to previous events, the further increase in the number of participants and submitted abstracts impressively shows the strength and significance of supramolecular chemistry in Germany, Professor Würthner said in his welcoming speech.

In the tradition of the previous events, three international top-level researchers, namely Prof. Vivian Yam (University of Hong Kong), Prof. Andrew Cooper (University of Liverpool) and 2016 Nobel Laureate for Chemistry Prof. Fraser Stoddart (Northwestern University, USA) were invited for the plenary lectures. Their impressive presentations gave the audience, particularly the many young scientists, exciting insights into cutting-edge research. During the coffee breaks, numerous students took advantage of the unique opportunity to talk to a Nobel Laureate. In 27 short presentations, both established researchers and promising young scientists from all over Germany and some neighboring European countries talked about their current work. The whole range of supramolecular chemistry was covered in six thematic blocks, convincing the participants of the high quality of research in this field in Germany and Europe. The topics included not only supramolecular machines, metallosupramolecular systems, and organic cage structures, but also application-relevant works in the fields of sensing, supramolecular polymers and materials science.

During the very lively poster session with 111 contributions, the participating postdocs, master and doctoral candidates, presented and discussed their own research results with great enthusiasm. Therefore, it was not an easy task for the poster jury to select a total of seven awardees from the consistently excellent presentations. The following students received book vouchers from the Royal Society of Chemistry (RSC), Wiley and Springer:

In his closing remarks, Florian Beuerle thanked the numerous volunteers from the Chair of Organic Chemistry II and the Center for Nanosystems Chemistry. Due to their excellent organization under the supervision of chair secretary Eleonore Klaus, a smooth run of the conference was ensured. The two organizers thanked Ms. Klaus with a beautiful bouquet of flowers for her great commitment. On closing the conference, Dr. Beuerle adverted to the 6th edition of SupraChem, which will take place in Mainz in 2021. 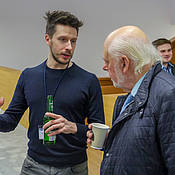 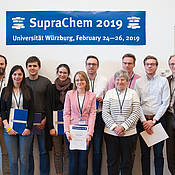