Progress has been made on the path to sunlight-driven production of hydrogen. Chemists from Würzburg present a new enzyme-like molecular catalyst for water oxidation. 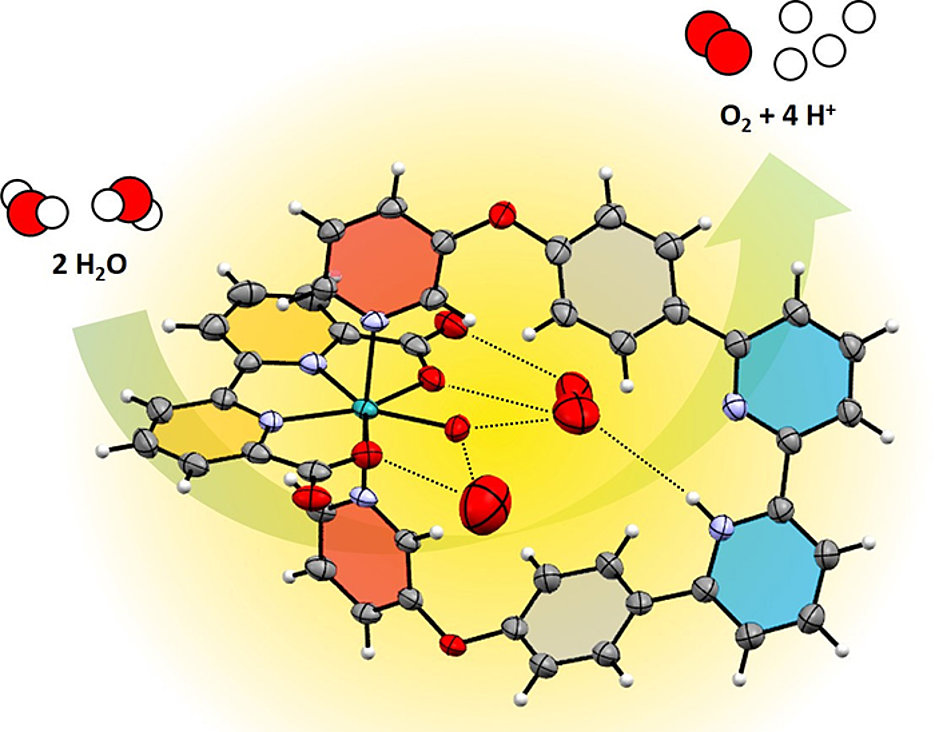 Mankind is facing a central challenge: it must manage the transition to a sustainable and carbon dioxide-neutral energy economy.

Hydrogen is considered a promising alternative to fossil fuels. It can be produced from water using electricity. If the electricity comes from renewable sources, it is called green hydrogen. But it would be even more sustainable if hydrogen could be produced directly with the energy of sunlight.

In nature, light-driven water splitting takes place during photosynthesis in plants. Plants use a complex molecular apparatus for this, the so-called photosystem II. Mimicking its active centre is a promising strategy for realising the sustainable production of hydrogen. A team led by Professor Frank Würthner at the Institute of Organic Chemistry and the Center for Nanosystems Chemistry at Julius-Maximilians-Universität Würzburg (JMU) is working on this.

Water splitting is not trivial

Water (H2O) consists of one oxygen and two hydrogen atoms. The first step of water splitting is a challenge: to release the hydrogen, the oxygen must be removed from two water molecules. To do this, it is first necessary to remove four electrons and four protons from the two water molecules.

This oxidative reaction is not trivial. Plants use a complex structure to catalyse this process, consisting of a cluster with four manganese atoms over which the electrons can spread. Würthner's team has developed a similar solution within their first breakthrough published in the journals Nature Chemistry and Energy & Environmental Science in 2016 and 2017, a kind of "artificial enzyme" that can manage the first step of water splitting. This water oxidation catalyst, which consists of three Ruthenium centres interacting in a macrocyclic architecture, successfully catalyses the thermodynamically-demanding process of water oxidation.

Success with an artificial pocket

Now, chemists at JMU have succeeded in making the sophisticated reaction take place efficiently on a single ruthenium centre. In the process, they have even achieved similarly high catalytic activities as in the natural model, the photosynthetic apparatus of plants.

"This success was made possible because our doctoral student Niklas Noll created an artificial pocket around the Ruthenium catalyst. Therein, the water molecules for the desired proton-coupled electron transfer are arranged in front of the ruthenium centre in a precisely defined arrangement, similar to what happens in enzymes," says Frank Würthner.

The JMU group presents the details of their novel concept in the journal Nature Catalysis. The team consisting of Niklas Noll, Ana-Maria Krause, Florian Beuerle, and Frank Würthner is convinced that this principle is also suitable for improving other catalytic processes.

The long-term goal of the Würzburg group is to integrate the water oxidation catalyst into an artificial device that splits water into oxygen and hydrogen with the help of sunlight. This will take some time, as the catalyst must be coupled with other components to form a functioning overall system – with light-harvesting dyes and with so-called reduction catalysts.

The European Research Council (ERC) has funded the described work within an ERC Advanced Grant for Frank Würthner (grant agreement No. 787937). Further funding came from the Bavarian Ministry of Science and the Arts within the research network "Solar Technologies go Hybrid".

On 12 October 2022, the online magazine Chemistry World (published by the Royal Society of Chemistry) released a press article about the publication: