In the fight against multi-resistant bacteria, University of Würzburg chemists may have achieved a major breakthrough. With a trick, they induced the bacteria to change their cell surface. This reduced the risk of infection dramatically. 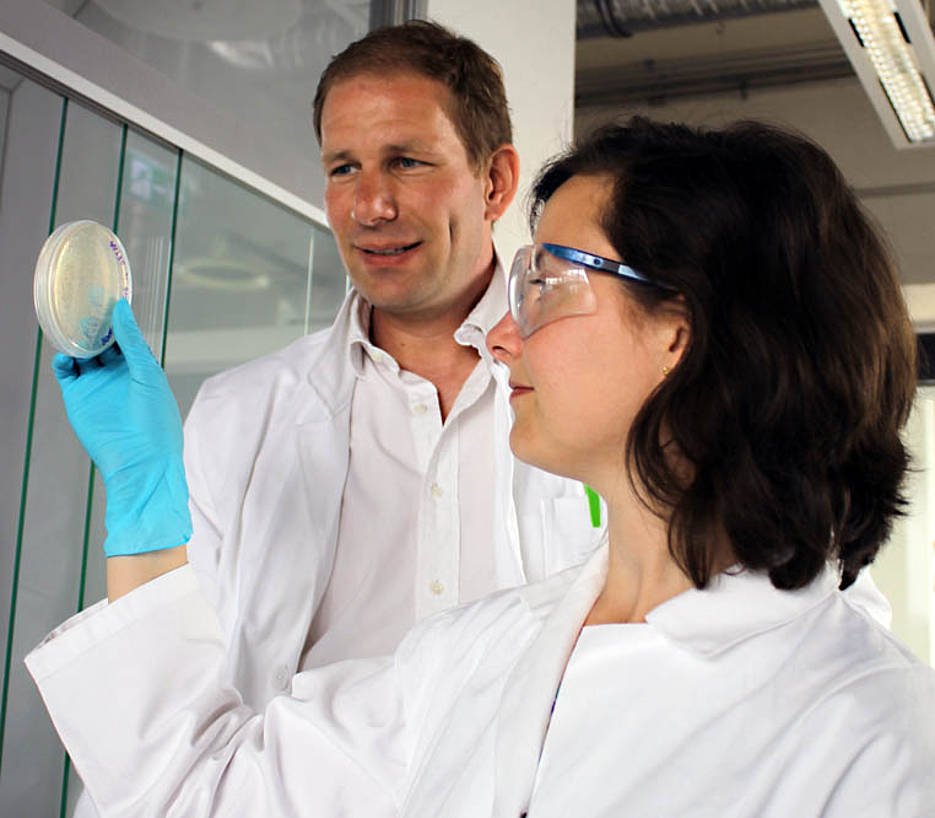 Elisabeth Memmel and Jürgen Seibel change the cell surface of the bacterium Staphylococcus aureus. This is a potential breakthrough in infection research. (Photo: Julian Görl)

In Germany, 4.3 percent of all hospital patients acquire an infection during their stay in hospital. This corresponds to 400,000 to 600,000 infections each year, leading to the death of 10,000 to 15,000 patients. This is the result of a study published in 2012, which was conducted by the Center for Sepsis Control and Care at the University of Jena. Multi-resistant pathogens account for about 15 percent of these infections. The so-called MRSA pathogen is especially prevalent: Methicillin-resistant Staphylococcus aureus.

University of Würzburg chemists have now achieved a potential breakthrough in infection research. Prof. Jürgen Seibel and his Ph.D. student Elisabeth Memmel have changed the cell surface of the bacterium. The consequence: "The adherence of the bacteria to human cells and thus the risk of infection were significantly reduced," says Jürgen Seibel.

Taking advantage of the bacterial metabolism

As the scientists report in the current issue of the prestigious journal Chemical Communications, they used the bacterial metabolism against the bacteria themselves. For this purpose, they chemically produced certain sugar-like structures and added the molecules to the nutrients for the bacteria. The bacteria metabolized these molecules, incorporating them into their cell surface by biosynthesis.

"The astonishing thing is that the relevant sugar structures are preferentially incorporated in the bacteria, but they are rarely integrated into human cells. This enables us to attack the bacteria in a targeted way without affecting the human cells," explains Elisabeth Memmel, who conducted the study for her doctoral thesis.

The chemists used yet another trick in order to reduce the adhesion of the bacteria to human cells: The sugar structures used were tagged with a special marker, which makes them chemically modifiable even after incorporation into the cell surface of the bacteria. The method employed is called "click reaction". In this reaction, two selected molecule types not naturally occurring in the organism combine into one unit. The biochemical processes of the bacterial organism taking place in parallel remain unaffected by these manipulations, as the two researchers were able to show in their study.

New approach in the development of therapeutic drugs

According to Jürgen Seibel, this novel method opens up the possibility of exploring the recognition processes involving bacteria and human cells. Furthermore, he is optimistic that his findings will pave the way for the development of novel drugs against multi-resistant bacteria. "Most antibiotics are intended to inhibit the synthesis of the bacterial cell wall or to interfere with other essential bacterial processes. In our new approach, we try to target the adhesion of the bacteria to human cells," says Seibel.

Bacteria of the type Staphylococcus (Latin: grape) aureus (gold) are usually harmless and can be found almost anywhere in nature, e.g. on the skin and in the upper respiratory tract of 25 to 30 percent of people. If favorable conditions or a weakened immune system allow the bacterium to spread, it causes inflammations of the skin and muscular diseases in humans. In severe cases, those affected develop life-threatening diseases, such as pneumonia, an inflammation of the inner layer of the heart (endocarditis), toxic shock syndrome (TSS) or sepsis.

Some bacteria have succeeded in developing a resistance to several important antibiotics (multi-resistance) so that they are particularly hard to eliminate. These include MRSA, which are resistant to all β-Lactam antibiotics, such as penicillin derivatives, cephalosporins and carbapenems, and the vancomycin-resistant strains of staphylococcus aureus (VRSA), which are slightly less known to the general public. MRSA bacteria are increasingly found even outside hospitals and can be transmitted to other persons.