A fascinating Siegfried Hünig Lecture 2019, given by Prof. Makoto Fujita, showed that chemists are able to revert the principle "Form Follows Function", which is very common in architecture and was fundamental for the famous German art school "Bauhaus". 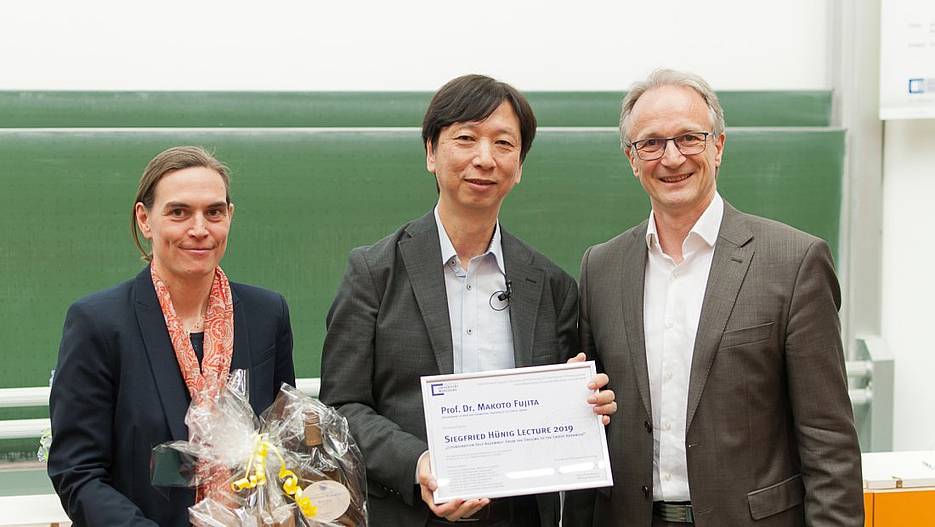 The molecular cages („metal-organic frameworks“ MOFs), which Prof. Fujita has been designing for 30 years definitely offer an astounding range of applications in various fields of synthetic chemistry and structure elucidation. Here, the determining aspect is the form of the cage, in particular the size of the cavity. Therefore, function follows form!

It seems amazingly simple how Fujita designs his cages. They self-assemble from only two carefully chosen building blocks – a metal ion and an organic ligand. Actually, self-assembly is a principle also found in nature. However, in the reaction flask highly symmetric structures are obtained, which can even teach mathematicians with new aspects of geometry, as Fujita explained in his lecture.

Very instructive and sometimes surprising even to the most experienced chemists in the audience was the wide range of possible applications, e.g. in catalysis and as “crystalline sponges”, which allow for the determination of crystal structures of small and medium size molecules, without the often painful process of growing single crystals. At that point, Prof. Fujita, with a twinkle in his eye, had everyone laughing when he mentioned that the "crystalline sponge method" greatly speeds up everything in his laboratory, with three months being sufficient to achieve a PhD.

After graduating with a MSc degree from Chiba University, Makoto Fujita earned his PhD at the highly renowned University of Tokyo in 1987. He held faculty positions at Chiba University and Nagoya University before he returned to the University of Tokyo in 2002. Prof. Fujita’s pioneering research is documented in more than a hundred publications in Angewandte Chemie and the Journal of the American Chemical Society as well as several letters in Nature and Science. It was recognized with numerous national and international awards, including the Nagoya Silver Medal (2002), the Izatt-Christensen Award in Macrocyclic and Supramolecular Chemistry (2004) and the Arthur C. Cope Scholar Award from the American Chemical Society (2013). In 2018 he has been awarded the Wolf Prize in Chemistry "for conceiving metal-directed assembly principles leading to large highly porous complexes ".

The Siegfried Hünig Lecture was initiated in 2011 on the occasion of the 90th birthday of Prof. Dr. Dr. h.c. mult. Siegfried Hünig. Each year an internationally renowned chemist is invited to give this name lecture at the University of Würzburg. Among the previous lecturers are the Nobel Laureates Jean-Marie Lehn and Ben Feringa.