The Université Officielle de Mbujimayi has granted the honorary doctorate to Prof. Gerhard Bringmann from Würzburg. In doing so, it honors Bringmann's scientific work and the support of young-and-upcoming academics in the Congo.

The BEBUC scholars with the members of the UOM Executive Committee and the Deans, and with the Deputy President of the Provincial Parliament; on the screen: Prof. G. Bringmann. (Photo: A. Mfwamba) (Image: A. Mfwamba)

Already before, Bringmann had been distinguished by honorary doctorates from five further Congolese universities like, recently, from the University Officielle de Bukavu, in the East of the Democratic Republic of the Congo. Bringmann has been teaching and researching at the University of Würzburg since 1987, until 2017 as the holder of the Chair of Organic Chemistry I; since then he has been active as a 'senior professor'. He was mainly honored for his commitment in the context of the scholarship program BEBUC, which he initiated together with his Congolese colleague Virima Mudogo. At the same time his outstanding scientific contributions in the field of natural products chemistry were honored, like for example in the search for new agents against infectious and tumoral diseases. His work has been documented in more than 750 publications and patents.

Bringmann’s scientific merits had already been distinguished several times before, e.g. by the Adolf-Windaus Medal and the Paul-J.-Scheuer Award for Marine Biotechnology, and by honorary professorships at a South African and two Chinese universities.

His humanitarian commitment was honored, i.a., by the Gusi Peace Prize, by the Médaille du Mérite Civique First Class in Gold of the Congolese People, and by the medal Bene Merenti in Gold of the University of Würzburg and, very recently, by the Federal Cross of Merit at the Ribbon of the Federal Republic of Germany. Bringmann is a member of the European Academy of Sciences and Arts and of the African Academy of Sciences – and he is now the first to receive the Honorary Doctorate of the Université Officielle de Mbujimayi (UOM).

Mbujimayi is the capital of the province Kasai-Oriental in the southwestern center of the Democratic Republic of the Congo. The environment of the city is known for its rich deposits of diamonds. The State University of Mbujimayi, founded in 1993, was initially an extension of the University of Lubumbashi and became independent in 2005. It has seven faculties with a total of currently about 4000 students. Since 2013, it has been participating in the BEBUC scholarship program and has, since then, been connected to the University of Würzburg by a memorandum of understanding. It was within this collaboration that the Rector of UOM, Prof. Alexis Mpoyi, paid a visit to Würzburg in 2018.

The aim of the scholarship program BEBUC is to support outstanding junior academics in the Congo on their way to a professorship. This goal has meanwhile been reached by 13 of the supported scholars: They were appointed professors at Congolese universities and some of them have even reached a full professorship. Among the currently nearly 200 scholars, about 80 are presently doing their master or doctoral studies abroad. "The new professors will provide a substantial contribution for an improvement of research and teaching at the universities and will, thus, contribute to the reconstruction of their country. In doing so they will contribute to better living conditions in the Congo and, simultaneously, work against migration", Bringmann is convinced.

Bringmann is the chairman of the NGO Förderverein Uni Kinshasa e.V. (fUNIKIN), with presently about 2000 members from nearly 60 countries, which organizes the scholarship program BEBUC. He is supported by the professors Alfred Forchel, Ulrike Holzgrabe, Virima Mudogo, Karine Ndjoko, and Hypolite Muhindo, and by the treasurer Christine Wolf. The funding comes primarily from the German foundation Else-Kroener-Fresenius-Stiftung (Bad Homburg).

A total of ten BEBUC scholars are presently being supported in Mbujimayi, among them also a student at the scientific secondary school Institut Kristo Mfumu, five scholars doing their bachelor studies (medicine, economics, and law), and four bachelor graduates, who are preparing for their master specialization in medicine. Here – as also in other BEBUC locations – the scholars organize themselves in a democratic manner: It is only recently that they have re-elected Felly Nzengu as their Speaker and Dorcas Ndaya as the Deputy Speaker. And of course there is also a Speaker at the secondary school, Esther Ngoya. Furthermore, they are supported by a tutor, who, qualified by his advanced studies and his experience abroad, supports the scholars in important study-related, organizational, and ethical questions. This task is presently taken by Hervé Mbuyamba, who will soon start his master specialization in surgery at Makerere University in Uganda. The togetherness of the scholars is strengthened by regular seminars in the BEBUC room as also by joint excursions, where they come to see the beauty of their country.

The Rector of UOM, Prof. Alexis Mpoyi, who has been a member of the NGO fUNIKIN since 2012, as well as the Secrétaire Général Académique (Vice Rector) and the Dean of the Faculty of Sciences, praised Bringmann's scientific achievements and his great commitment for the university and for the Congo in
general. Also Prof. Mudogo highlighted, per video, Bringmann’s great contributions. During the solemn
ceremony, representatives of public life, and of politics were also present, among them the Vice President of the Provincial Parliament, the local Minister of the Interior, the Mayor of Mbujimayi, and the members of the Executive Committee of UOM, as well as the Deans of the Faculties. Because of the Corona pandemic, Gerhard Bringmann participated in the celebration online, from Würzburg.

"It is nice that the good relationship between the University of Würzburg and UOM is further strengthened by this distinction. Our intense support of young academics at UOM and in the entire Congo would not be possible without the long-term support by the foundation Else-Kröner-Fresenius-Stiftung, to whom we owe a great debt of gratitude", says Bringmann. 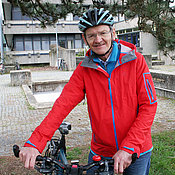 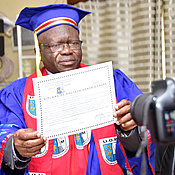 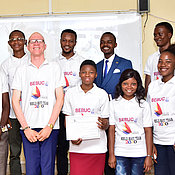 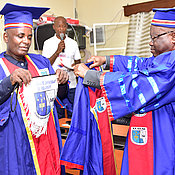