From Illinois to the Main

US scientist Michael R. Wasielewski has received a Humboldt Research Award. He will now pursue his research activities in the field of artificial photosynthesis at the Nanosystems Chemistry Center of the University of Würzburg with Professor Frank Würthner. 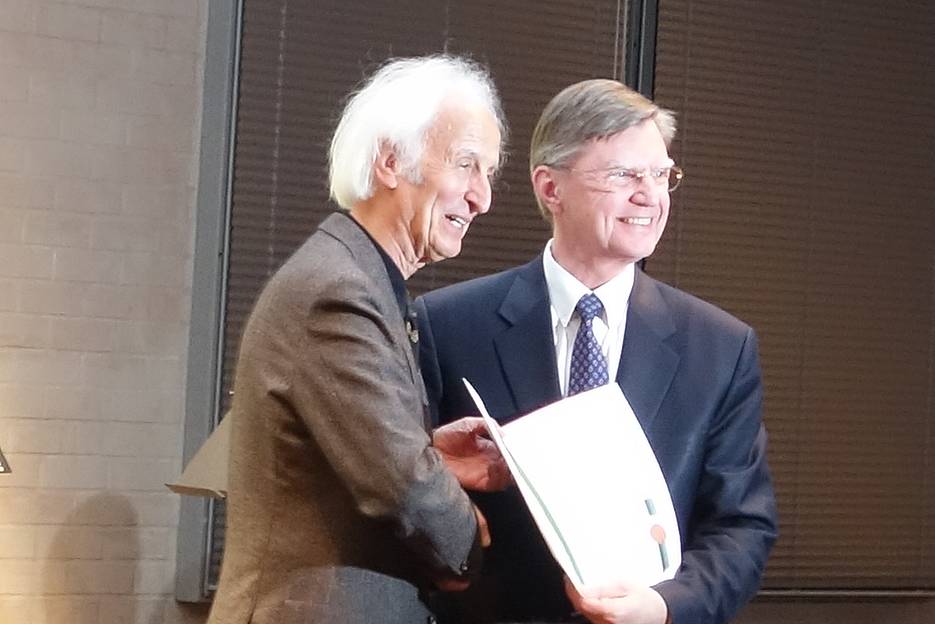 "Light-induced energy, charge and spin transport in molecules and materials:" this is Michael R. Wasielewski's various research projects in a nutshell. Mr. Wasielewski is a professor of chemistry at the Northwestern University, Illinois (USA); he has just received the Research Award of the Alexander-von-Humboldt Foundation.

The award is given to scientists "in recognition of a researcher's entire achievements to date to academics whose fundamental discoveries, new theories, or insights have had a significant impact on their own discipline and who are expected to continue producing cutting-edge achievements in the future", according to the foundation's definition. It is reserved for scientists from abroad; the awardees can then conduct their own research projects in Germany in cooperation with their peers for a period of several years.

Michael R. Wasielewski has chosen the Institute of Organic Chemistry II of the University of Würzburg for his stay. For quite some time, Professor Frank Würthner and his research group have been working on arranging small organic molecules to form larger assemblies that absorb sunlight and transport it to electrodes where it can be converted into electrical power. Another goal of their research is the development of artificial chloroplasts that use light energy to create fuels similar to a plant cell.

Mr. Wasielewski is working on similar fields: One of his projects aims to produce solar fuels with the help of artificial photosynthesis. Water plays a major role in this process: using the corresponding photocatalysts it can be split in high-energy hydrogen and oxygen. For this purpose, Wasielewski synthesizes the required complexes between dye absorbers and catalysts based on transition metals and investigates the chemical processes using spectroscopic methods.

Another focus of his research efforts is the development of new materials for the so-called organic photovoltaics. Organic-based solar cells have many advantages: They are easy to produce, low-cost, lightweight and flexible. Their efficiency, however, still falls short of that of classic silicon-based solar cells. Wasielewski therefore aims to enhance the efficiency of organic solar cells.

Another field of his research work centres on molecular electronics which is used to create energy through light and also for data processing. Here the chemist is studying how electric charges can be transported over long distances virtually loss-free. He is particularly interested in the exact processes involved in the transport of electrons inside so-called electron donor-acceptor systems.

Delighted about the decision

"We are delighted that Michael Wasielewski is joining our still young research centre to support our work groups", Frank Würthner welcomes the decision of the Humboldt Research Award laureate. He considers the choice to be an indirect confirmation of the high research quality at the Faculty of Chemistry and Pharmacy of the University of Würzburg.

Michael R. Wasielewski received his Bachelor of Science and Ph.D. from the University of Chicago. After working at Columbia University and the Argonne National Laboratory he joined the Northwestern University where he is currently "Clare Hamilton Hall Professor of Chemistry". Moreover, he is the director of several research institutes, including the Argonne-Northwestern Solar Energy Research (ANSER) Center and the Solar Fuels Institute. He received a number of awards in recognition of his work – among others the RSC Environment Prize (2013), the Porter Medal for Photochemistry (2008) and the James Flack Norris Award in Physical Organic Chemistry of the American Chemical Society (2006).

The Humboldt Foundation is giving 57 research awards this year each worth 60,000 euros. They are traditionally presented at an award meeting in Bamberg which took place from 20 to 23 March this year.

Please click here for the German version of this article.