Organic Structural Chemistry in the Spotlight On Friday, 1st October, during the annual discussion meeting of the division Magnetic Resonance (FGMR) of the German Chemical Society (GDCh) Ann-Christin Pöppler was awarded with the Felix-Bloch Lectureship 2021 for her work on organic structural chemistry in the context of drug delivery. As awardee and tehrefore an ambassador for magnetic resonance, Ann-Christin is especially happy to get the possibility of doing four presentationsa across Germany and share her enthusiasm and research about NMR spectroscopy. During her award lecture she talked about “Taking up the chase with NMR spectroscopy – From structural insights into solid drug-polymer formulation to their fate in biorelevant media”. 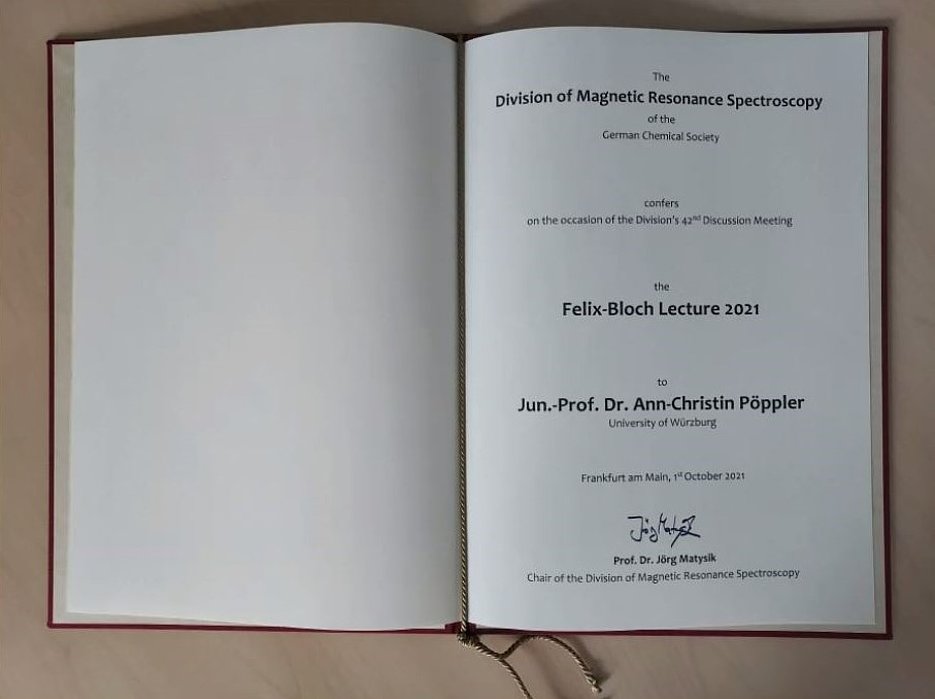 The award recognizes the work related to magnetic resonance during the past five years and is therefore also an appreciation for all current and previous members of the workgroup for their team effort and spirit.  Ann-Christin and her team will use this motivation to further improve how disordered organic-pharmaceutical materials are analysed and discussed, to work on developing solutions for better, tailor-made properties of drug-polymer systems and to build and expand bridges between different areas of magnetic resonance, synthetic chemistry and pharmacy.

Special thanks to all past and present supporters, in particular the members of the two NMR units at the Institutes of Organic and Inorganic Chemistry here in Würzburg for their help and for being such good colleagues!

The Felix-Bloch Lectureship by the division Magnetic Resonance of the German Chemical Society (GDCh) is usually awarded annually to one scientist. Due to cancellation of the event in 2020, two Lectureships were awarded on this occasion. The other award was given to Stefan Glöggler at the Max-Planck Institute for Biophysical Chemistry in Göttingen. The award recognizes special achievement in the area of magnetic resonance during the past five years. The prize is dedicated to the physicist Felix Bloch, who received the Nobel prize in 1952 together with Edward Mills Purcell for the discovery of nuclear magnetic resonance. The Felix-Bloch Lectureship is endowed with 1000 €. More importantly, the awardees can give presentations at up to four different events across Germany, which are covered by the GDCh.