This current topic was presented by the Siegfried Hünig Lecturer 2022, Prof. Peter Bäuerle. A second talk given by Prof. Hans-Ulrich Reißig honored the scientific work of Siegfried Hünig who deceased in 2021.

Only once before, when the Siegfried Hünig Lecture was installed in 2011, as many guests as on 23 June had come to Würzburg. There are certainly several reasons for this great interest this year. For example, the event could not take place in 2020 and 2021 due to corona restrictions. All the more effort was made this year. The program was extended by an additional highlight: Professor Hans-Ulrich Reißig from Berlin spoke about "Siegfried Hünig's scientific work". Probably, some guests considered this year's event as the best opportunity to pay tribute to Siegfried Hünig posthumously. Finally, Professor Bäuerle's lecture dealt with a highly topical matter: renewable power generation.

Dresden as a common thread

Already during the opening speech by Professor Frank Würthner, it became apparent that Dresden, from where Siegfried Hünig had to flee after the destruction of the 2nd World War, would be of particular importance. From there, the already 84-year-old Professor Horst Hartmann, honorary curator of the dye collection of the TU Dresden, had come to Würzburg to show the bond between him and Siegfried Hünig. The TU Dresden was also an important station in the vita of the keynote speaker introduced by Professor Würthner, Professor Hans-Ulrich Reißig.

Professor Reißig began his homage to Siegfried Hünig in Dresden, where Hünig started his academic career. In 30 minutes, Reißig led the audience through Siegfried Hünig's enormously multifaceted scientific work and repeatedly showed references to cutting-edge research topics, not least to the research of the award winner, Professor Peter Bäuerle.

When chemists and physicists learn from each other

"SYNTHESIS – MATERIALS – ENERGY: From Molecules to organic solar cells" was the title of the lecture by Professor Bäuerle from Ulm. Accordingly, he first talked about synthesis and characterization of organic molecules with tailor-made photophysical and electronic properties.  How these molecules can then be used as materials for the construction of organic solar cells is necessarily the subject of intensive collaboration between chemists and physicists. Here, Peter Bäuerle explained how he and his team learned from the physicists that when optimizing the molecules, proceeding in very small steps, and waiting for the measurement results of the physicists is crucial to be able to interpret the observed changes in the relevant properties.

From the flask to large scale series production

In the impressive last part of his lecture, Professor Bäuerle showed how much they have learned from each other. He spoke about the step that he and his partners have succeeded in taking. A step that is as big as it is rare at universities: commercial application. And once again the focus was on Dresden. In Dresden, the company Heliatek, a spin-off of the universities of Ulm and Dresden, has its headquarters. After almost 15 years of development work, in which engineers and economists were involved in addition to chemists and physicists, Heliatek succeeded in launching the world's first commercial organic solar film HeliaSol in 2021. Compared to the widespread silicon-based solar cells, it is characterized by extremely low weight, flexibility, and a very small carbon footprint. In addition, it contains neither heavy metals nor rare earths. To illustrate this, Professor Bäuerle had brought along some samples that were passed through the ranks of the fascinated audience.

After a short scientific discussion, the audience enjoyed Franconian food and chilled drinks in the foyer. Another highlight on a remarkable event.

Website of Prof. Dr. Peter Bäuerle at the University of Ulm

https://onlinelibrary.wiley.com/doi/10.1002/anie.202101550 (Essay by Professor Hans-Ulrich Reißig published in Angewandte Chemie on the ocasion of the 100th birthday of Siegfried Hünig) 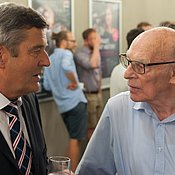 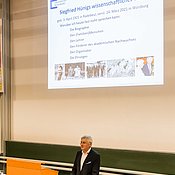 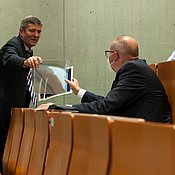 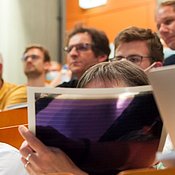 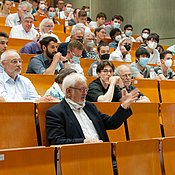 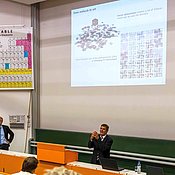 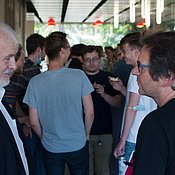