Within the Excellence Scholarship Program BEBUC, again outstanding candidates and 'prolongers' were evaluated in the east, north, and south of the Democratic Republic of the Congo, involving 14 out of 25 partner universities and schools. BEBUC thus now supports nearly 200 scholars. 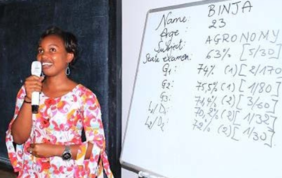 The previous BEBUC evaluation had taken place in early 2018 in Kinshasa, in the west of the Congo, and in Mbuji-Mayi, in the center of the country. Now, in March 2019, within a new evaluation campaign, it was the turn of the other BEBUC institutions, starting with Lubumbashi in the South, followed by Goma, Bukavu, and Butembo in the East. In Goma, furthermore, candidates from Kisangani in the north were examined, who had come especially for this purpose.

New Professors for the Country!

The aim of the scholarship program is to provide the universities in the Congo, which have suffered dramatically from the difficult conditions during the past years, a new generation of excellent young professors. BEBUC does not only support the scholars financially, but accompanies them by a specific and individual mentoring. Particularly intense and demanding is this mentoring mainly for the transition to the master studies and then to the PhD work. Both types of studies usually have to be performed outside the Congo and are, thus, highly expensive. Intense consulting and planning is also required in the case of the return to the Congo. After stimulating study and research activities abroad it is not an easy step to go back to one's home university. During the past year, BEBUC has helped over 20 scholars to attain an assistant position, and there are now two more new "BEBUC professors".

The Selection: at the Blackboard

A targeted support thus already starts with a well-established procedure for the efficient recognition of the truly best candidates. The selection takes place in two steps, first on the basis of the application files, then, however, mainly through the personal evaluation on site, in front of the international Evaluation Committee, with a presentation at the blackboard and a discussion on subject-related questions, but also on future concepts and visions of the candidates. The personality and language skills play a great role, too.

This time, 42 candidates (out of originally 176 applicants) were pre-selected, of which 15 have now been included into the program. Likewise evaluated were the already supported 74 scholars there, since these must annually face the evaluation and present their study results. The solemn presentation of the scholarship certificates occurred, as always, within the big scholarship ceremonies. On this occasion, also BEBUC Awards were given to particularly outstanding scholars. Furthermore, letters and small gifts from some of the personal sponsors were handed to 'their' scholars. Together with the scholars in the other parts of the Congo – in the west and in the center – and with the scholars presently studying abroad, BEBUC thus now supports 197 outstanding young Congolese.

Remarkable is the democratic self-organization in BEBUC. At each of the 25 participating institutions, the scholars elect a speaker (and, where required, also vice speakers). The 54 scholars presently studying abroad form the big External Virtual Institute and elect their Speaker and the Vice Speakers electronically. Jointly, all these speakers form the Speakers' Council, so-to-say the Parliament of all BEBUC scholars. Out of this Council, a Prime Speaker (main speaker) and a Vice Prime Speaker are elected, they represent the interests of the scholars inside and outside.

Evaluation in the South

The journey started in Lubumbashi, the capital of the Province of Haut-Katanga, in the south of the country. The University of Lubumbashi has been participating in the scholarship program since 2013, as also the girls' secondary school Tuendelee and, since recently, Anuarite, likewise a girls' school. The support of young women is a particular concern of BEBUC.

Evaluation in the East

The main portion of the evaluations was constituted by the interviews in the Province of South Kivu and North Kivu, in the east of the country. The starting point was Goma, the capital of North Kivu, picturesquely located at Lake Kivu, with the thrilling panorama of in part active volcanos. Here the Université Libre des Pays des GrandsLacs and the secondary school Institut Metanoïa were participating. From Goma, the committee travelled over Lake Kivu to Bukavu, the capital of South-Kivu, with two participating universities (Université Officielle de Bukavu and Université Catholique de Bukavu) and the secondary school Collège Alfajiri. Thereafter the trip proceeded to Butembo in the north of the Kivu, with the Université Catholique du Graben, which has been participating already since 2010, the Université Libre des Pays des Grands Lacs, and the Université Officielle de Ruwenzori, two secondary schools (Institut Kambali and Institut Malkia wa Mbingu), and a primary school, Nyuki. A particular highlight of the scholarship ceremony here was the signing of the partnership agreement of the secondary school Institut Malkia wa Mbingu with BEBUC and the University of Würzburg. By this now all 25 BEBUC institutions are contractually linked also to the University of Würzburg.

BEBUC owes its continuous, rapid, and breath-taking development mostly to the constant and generous support by the German foundation Else-Kröner-Fresenius- Stiftung over meanwhile nine years. "We are extremely grateful to the foundation and to all those who support us so efficiently, among them also the foundation Holger- Pöhlmann-Stiftung, the Bayer Foundations, and the nearly 2000 members of our NGO as well as all donors and personal sponsors", says Bringmann.

With its current support of 197 outstanding young Congolese by the coveted scholarship, BEBUC has reached its scheduled goal: a plateau of nearly 200 scholars. The next evaluation will routinely take place again at the partner institutions in the west (in Kinshasa, Mbanza Ngungu, and Kikwit) and in the center of the country (in Mbuji-Mayi). 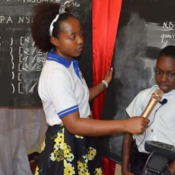 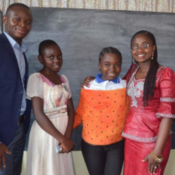 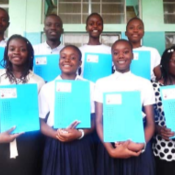